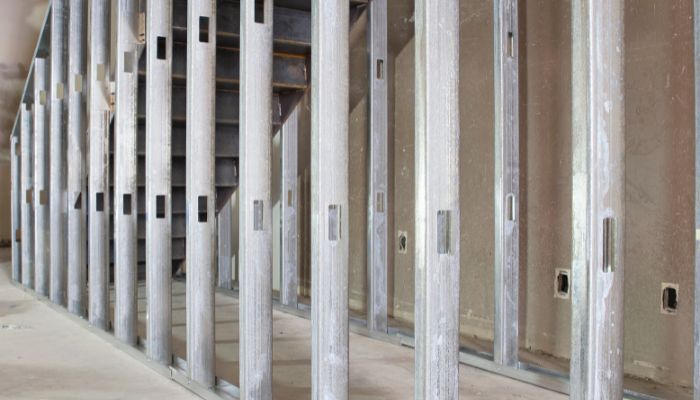 When you are starting a construction job, you want to be sure to have all of your ducks in a row. This can include everything from expected timelines to the materials you are going to use. One important material factor, for instance, is deciding whether you will use metal or wood studs for your walls. Commercial construction typically uses metal studs, while wood studs are more commonly used in residential construction. Each type of stud of course has its own advantages and disadvantages.

Read on to learn more about the great points of bother metal and wood studs.

Metal studs have plenty of advantages when you are using them for construction, which makes them a great choice for any sort of structural project, especially for bigger buildings like those that you see in commercial and residential construction.

For instance, metal studs are a healthier alternative to wood studs. This is because they do not emit VOCs.

VOC stands for volatile organic compounds, and they are in higher concentrations indoors than outdoors– in part due to less airflow. These can be dangerous for both the workers installing the wood studs, as well as those who will be using the building later.

Another great advantage of metal studs is how durable they are. They will not warp, twist, or otherwise get bent out of shape over time. This makes them a better long-term option and provides better structural integrity to the project.

They are also resistant to fire, unlike wood studs, so they are an extra safe choice, especially when a building may have a high risk of fire. An example of this could be an energy plant or factory, where there could be overheating machinery that causes fire hazards. Fire is not able to spread as quickly through a building that has metal framing.

Wood studs have their own valuable set of advantages, just as metal studs do. However, it is typically wood studs that are used for smaller residential projects, while metal studs are used in commercial or industrial projects.

One of the great things about wood studs is that they are easy to find and come in standard sizes. Wood studs are also less expensive than metal studs, so if cost is a concern, this might have you leaning towards wood studs rather than metal.

Another advantage of wood studs is that they will not rust over time like metal will. Rust can be very dangerous because it can eat away at the metal and cause the infrastructure of a building to deteriorate faster, which of course is linked to the building then having poor structural integrity.

For this reason, wood may be a good choice for areas that may see a lot of moisture– but then, wood may rot in these situations, so it is important to consider your options and the challenges you may encounter thoroughly before you make any final selections.

Why Use Metal Studs for Commercial Construction?

So, why are metal studs so commonly used in commercial construction, anyway? They are the more expensive option when choosing between metal and wood.

However, they are superior in quality, and there are more than a few reasons why they are the top choice for commercial construction jobs. Take a look at some of the reasons that we have outlined below.

First things first, steel studs are more durable! This is the primary and most important reason that builders choose to work with metal studs and metal framing for commercial buildings. Commercial buildings are typically larger, too, meaning they need a stronger infrastructure.

When it comes to these types of buildings, it is very important to have the best possible structural integrity, which makes metal the smartest choice for framing. Its increased durability will ensure that the building and its infrastructure will not deteriorate over time, so the builders are able to deliver long-lasting results and high-quality work.

Steel Studs Are Easy to Install

Another reason that metal studs can be a good choice for commercial construction is that they are easy to install, which will help increase efficiency on the job.

Things will get done quicker and builders will be able to cut down on the mistakes that a difficult-to-install stud would invite onto the job. While it is said that wood studs are easy to install, too, the other advantages of steel, paired with it being easy to install, make it an obvious choice.

One of the factors that make metal studs easier to install is that they will not pull out pieces of framing or break off like nails might. This allows them to focus more on completing the construction, rather than problem-solving.

Steel Is Fire and Insect Resistant

Both fire and insects can be damaging to a building. Luckily, steel and other metals are resistant to both of these things– unlike wood. Due to this, metal is the better choice for commercial buildings. Certain commercial buildings may have higher risks of pests getting in, which makes it even more important to have an infrastructure that is resistant to insects.

For instance, a commercial warehouse or factory where loading docks are often left open can invite in bugs. Commercial buildings that have a higher risk of fires, like factories that have equipment that could overheat, are also spaces that could benefit from the fire-resistant qualities of metal studs.

Wood studs can unfortunately warp or twist over time. This is, however, not something that we see with metal studs. Due to this, metal is a better choice overall, but especially for structures that are being built in areas that have significant fluctuations in moisture levels.

Steel is the material that is best able to stand up to different climates and weather conditions without being damaged. The additional stability of metal studs contributes to the longevity and durability of a building, as well as upholding its structural integrity. This is crucial for keeping the space safe for workers or other inhabitants.

Steel Can Be Fabricated to Fit

Another great thing about steel is that it can be prefabricated, which means it is precut and put together in a factory before being transported to the construction site. This expert fabrication can be helpful for builders because it is often more precise.

Plus, it can reduce waste during installation, and can also help to conserve space at the site, since smaller precut pieces are being brought over from the factory. The fabrication is not being done on the job site itself.

Which is better wood or metal studs?

If you are building a structure, you may wonder whether it is better to use metal or wood studs, and which is the better option. Steel is typically the better option out of the two. This is because steel is fire resistant, unlike wood, and it will also not shrink, split, mould, or warp.

What is cheaper wood studs or metal?

Of course, cost-effectiveness is important for construction projects– so, when deciding which kinds of studs you want to use, the price may be an important deciding factor.

Between wood and metal studs, wood studs are the cheaper option, They are also easier to work with and faster to install. Metal studs, on the other hand, are better quality and will not shrink, mould, warp, or split.

What are the benefits of metal studs?

Metal studs have many different benefits that put it head and shoulders above other stud options– such as wood. For instance, metal studs are healthier than wood studs because they do not emit VOCs.

Another benefit of metal studs is that they are fire resistant, so they are a safer option for a structure and will not need to be replaced in the event of a fire. Metal studs are also more durable and longer lasting, because they do not shrink, split, mould, or warp– all of which is possible if you choose to use wood studs instead.

Some of the structures that might use lightweight metal studs are interior walls, partitions, or half walls. When it comes to load-bearing studs, though, these are made from heavy gauge metal. You would typically find these being used in parts of a structure such as the exterior walls or the load-bearing interior walls.